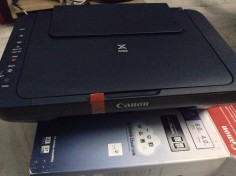 While the shopping festival is on everyone is busy looking to grab a perfect deal, well I’ve already got mine! This was during Snapdeal’s Electronics Monday where I found this deal or as Snapdeal says “#DilkiDeal” patiently scrolling on my iPad and wasted no time to place an order, what was the deal? It was the Canon Pixma E460 All In One Printer which was on offer and was available for 3200Rs. You must be wondering what’s so special / khaas about this one, I’ll tell you right away, a quick review of Canon Pixma E460 All in One printer!

The Canon Pixma E460 is an entry-level budget All in One Printer in the offing by the company. The original price of the product mentioned on Canon’s website is 5995Rs, but Snapdeal was providing it for a mere 3200Rs. The best part was, I ordered it at 7 in the morning and before I was home, the printer was! So hat’s off to Snapdeal for pulling this one off! Moving on, first looks. The printer is black with matte type finish all over, slightly bigger than my previous AIO HP C4488 (That indeed was a superior model , but cartridges were way too costly)

Other features include color and b/w printing, the box supplied contain two cartridges one each of black (PG-47) and color(CL-57), both these cartridges are available online for about 500Rs and 1000Rs respectively. So from the price point of view, this is pretty good. The company claims that the printer prints about 400 pages from one cartridge.

Apart from this, it has a scanner so copying, scanning is also taken care of. But the real deal is that the Canon Pixma E460 is a WiFi Enabled printer. Yes !! A Wifi-enabled printer for just 3k! This is the feature that makes the product stand out. You can simply hook it up with a LAN cable, connect it with your routers or connect directly to the device (smartphone, tablet, laptop, etc) and print / scan a document without connecting to a computer.

Configuring the WiFi feature was a tad tedious as it wasn’t simple. Even though the manual provided had images, but they weren’t quite clear. Finally ended up downloading a user manual from their website which showed exactly hows its done. Once the setup was done, downloaded the Canon Print app from the Play Store for my Nexus 5 and there I was printing files from the phone hassle free !

As of cons of the product, well found a couple of them, first of all the print speed is a bit slow compared to some other printers and secondly the printer doesn’t have any LCD screen, so the lights can get confusing at times (especially when your are configuring WiFi) Nevertheless, these are small issues and won’t cause any huge problem.

So all in all, this was definitely a steal ! Couldn’t get this one for a lesser price than this one. Currently its sold for around 3.5K on Amazon / Snapdeal and other sites. That’s all for this post, as I wait for my other orders from Myntra and Snapdeal to show up 😉

Below are some other printers that you could also try:

A seasoned blogger and a content marketer for close to a decade now. I write about Food, Technology, Lifestyle, Travel, and Finance related posts. Blogging brings me joy and the best part is I get to read and e-meet so many amazing bloggers! PS: I'm also the founder for Socialmaharaj.com :) Favorite Quote: "Traveling is like reading a book, one who hasn't traveled, hasn't turned a page.
@atulmaharaj
Previous Time to gear up for the shopping fever !!
Next End of the fasting “Feast”