The colourful procession with the idols.

Traditional Gangaur Celebrated At Shahpura With Regal Pomp And Pageantry 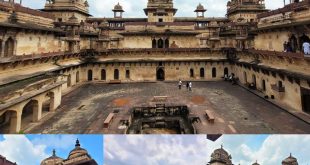 Khamma Gani ! Let me start this post by asking a question What is it that sets Rajasthan apart from all the other ethereal places in world ? Apart from the beauty, architecture, history & the glorious tales that will glue you to its arms, it’s the one thing that defines the real charm here – the festivals. The state of Rajasthan celebrates every festival with great vigor and glory. On this note, let me take you to one of the most beautiful festivals of Rajasthan – Gangaur, which truly embodies the spirit of diversity.

When the bright skies have ushered in the festive season, the remote town of Shahpura, located 65 km from the capital Jaipur, Rajasthan came culturally alive when the pious deities of Isar Maharaj & Gangaur Mata were regally taken around the streets and worshipped with vigour & devotion by both men and women.

Rajmata Gunwant Kumari from the family of the erstwhile rulers of Shahpura and Rani Ratna Kumari foundation that works for women empowerment led by the family, have been celebrating this festival on a magnificent scale since 2017 after a gap of 40 years. On the day of Gangaur, the celebration began when Rani Ratna Kumari along with the married & unmarried woman of Shahpura, dressed in colourful Rajasthani attires worshipped idols of Isar Maharaj & Gangaur Mata at the Shahpura Haveli, a luxury boutique hotel owned by the royal family of Shahpura – Shahpura Hotels

The great Gangaur Mahotsav was organised at the royal Rawla Moti Mahal and it was spectacular to see the idols being gloriously taken there. The major attractions of Shahpura Gangaur Festival were the cultural performances of local artists & folk musicians of Rajasthan, several kinds of regional nritya (dances) like Mayur, Nritya, Masak Nritya, Behpang Nritya. Apart from these, there was a magic show, horse show, and other traditional games & competitions. Artists from various parts of the country namely Udaipur, Deeg, Jodhpur, Haryana, Punjab performed magnificently with their euphonic tunes and twinkle toes. The royal family of Shahpura – Maharaj Surendra Singh Shahpura and Rani Ratna Kumari of Shahpura also participated in the festival. They felicitated the local artisans in a ceremony to conclude the festival till it comes back next year.

The grand procession of Isar Maharaj & Gangaur Mata began with all its regal pomp and pageantry at 5 p.m. from Rawla Moti Mahal. Both men & women could be seen beaming in colors of Rajasthan.  The procession passing through the vivid markets of the town, encompassed horses, camels, traditional folk dancers, brass bands from Punjab, lancers etc. along with the pious deities of Gangaur Mata ji and Bhagwan Isar ji Maharaj, finally converging at the newly restored Gopinath Temple. The town was teeming with both foreign nationals and domestic tourists rejoicing the festivities.

Gangaur Festival is one of the most colorful & auspicious festivals of Rajasthan – celebrating spring, harvest & marital fidelity. While ‘Gana‘ is another name for Lord Shiva, ‘Gaur‘ symbolises Gauri aka Parvati, his wife, also an epitome of marital bliss. The 18-day festival is observed by both married & unmarried women where they fast, women dress up in red bandhani sarees and turban clad men worship the clay idols of Isar & Parvati.

Celebrated with great pomp and show, Gangaur Festival gives visitors and tourists a spectacular opportunity to observe Rajasthan’s magnificent culture from close quarters. We are already waiting for next year to witness such a splendid event in an all its royal glamour. The state comes life during Gangaur and you should visit it the next time you are in Rajasthan. For more information you can visit the Rajasthan Tourism page. Have you been there already ? How was your experience ? What aspect of Gangaur festival you actually like ? Mention in the comments below or tweet to me at @atulmaharaj

A seasoned blogger and a content marketer for close to a decade now. I write about Food, Technology, Lifestyle, Travel, and Finance related posts. Blogging brings me joy and the best part is I get to read and e-meet so many amazing bloggers! PS: I'm also the founder for Socialmaharaj.com :) Favorite Quote: "Traveling is like reading a book, one who hasn't traveled, hasn't turned a page.
@atulmaharaj
Previous Plan a Road Trip with Savaari Car Rentals
Next Forks and Folks – My Travel Inspirations. What are yours ? #SayYesToTheWorld