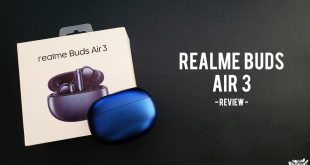 30 years ago computers were seen mostly at offices. About 15 years ago, I got my first desktop computer at home. Around 5 years ago I got my first smart phone. You see how fast technology is changing and are becoming more accessible. Wearing gadgets was seen only in those Hollywood sci-fi movies. Who would have thought that we would be wearing technology today ? Smart Glasses, Smart Pendants, Fitness Bands are few of the gazillion wearable gadgets around us. These gadgets in my opinion not only make our lives simpler but also make us more productive. The first wearable gadget that I had was the Xiaomi Mi Band – the first edition that I got during the 1Re Flash Sale. I was amazed to see what all it could do.

The Sonic V08 Talkband HR comes in a cute little all white box. The box has a glossy image of the talk band itself with specifications at the back and few branding on the right. On opening the box, you see the Sonic V08 Talkband housed in the charging unit. Inside the box, you have the band, charging cable – USB to micro-USB cable, extra pair of ear buds, user manual and warranty card. First looks, the device looks good. The glossy display is a finger-print magnet but the overall design is good. With the Sonic V08 Talkband you can also talk, the unit has a built-in earpiece. The earpiece is the in ear types and fits in nicely. I didn’t run while talking so can’t talk much about the fit here.

The Sonic V08 Talkband fits perfectly in the wrist band. The band is made of silicon which ensure it fits perfectly on your hand. Wearing this band is as easy as wearing a watch, only thing is that by design it is a little awkward. The Sonic V08 Talkband even with the earpiece doesn’t cause any uneasiness while wearing. So on the design front, the device is pretty good.

How is the Sonic V08 Talkband more than just a fitness band ? Well, the Sonic V08 Talkband features a Bluetooth Earpiece which ensures you can listen to music and take calls on the fly. Another new feature of the talkband HR is the inbuilt blood pressure monitor, never thought this could be on my fitness band. It can also remind you if you have suddenly become too lazy. The smart band also acts as a remote control to take photos from your smart phone. Apart from these, the Sonic V08 Talkband comes with the standard features of step counter, heart rate monitor, sleep monitor and phone tracking. Since it has the Bluetooth Earpiece you can easily take calls on the go, if your phone is paired with the device. Functionality wise, it looks pretty good on paper.

Technically, the Sonic V08 Talkband is powered by a 95mAh battery which the company says can last for 72 hours. In my test, it did manage to get that much. However I did switch it off for sometime. It connects to your phone via Bluetooth using an app. This lightweight device weighs roughly 35g and you’ll never like carrying a rock when you walk. The display is a 0.96″ OLED display which is quite crisp. It uses the Osram SFH7070 sensor to monitor heart rate. The Osram is a an optical sensor that uses bright light to measure the heart rate and blood pressure.

Powering on and using the device is pretty easy – tap 3s on the screen to switch it on or off. The display is quite easy to use as navigation is just based on one tap. The home screen is the watch face that displays the battery and Bluetooth status. Next is the steps counter followed by the Sleep Counter, Heart Rate Monitor, Blood Pressure, Bluetooth Earpiece pairing and turning off option. The steps calculation was pretty accurate I’d say and so was the blood pressure. I used the one-touch BP monitor device to check the data reported by the device. It within +/- 1 point, so that I’d say is accurate, however it takes some time to gather the data. The notification system works good too. There are a lot more features that you can utilise if you pair with the app.

The app – HBand – is available on the PlayStore as well as the AppStore. One of the most toughest part was to pair the Sonic V08 Talkband with the phone. I have paired hundreds to devices to my using Bluetooth, but this was the toughest one to pair. It simply refused to pair. (Tried on Oneplus 3T and Redmi Note 5) Essentially the pairing works in two modes – frist being the normal mode and the second being the headset mode to listen to music and make calls. Pairing it in the headset mode was pretty easy. The sound quality is ok when it comes to calling. But if your ears are accustomed to good pair of earphones, these are a disappointment when it comes to listening to music. The voice distortion is way too much.

After trying for like few hours, I realised that it only paired if the location is switched on your phone. Strange ! I mean why would you want location to pair my fitness band ? You need to have your Bluetooth on and the location on so that you can pair this thing easily with your phone. Once paired, you can change the watch face (3 presets), activate per app notifications, activate find my phone and remote camera click from settings. Apart from generating visually appealing graphs, the app allows you to manually take heart rate and blood pressure. You can also enable options to notify if your heart rate rises beyond a specified limit. That’s a good thing to have.

The Sonic V08 Talkband is a good innovation I’d say. I don’t know any other fitness tracker that comes with a Bluetooth earpiece. It is very easy to use and the user interface of the device is easy to navigate. Pairing the device with a phone was a tedious task and I’m glad it came with a helpful user manual. The heart rate notification is a good feature to have and so is the Bluetooth ear piece that does a good job on the calling front (not great for listening to usic). This device is however not for listening to music, the earpiece has a lot of distortion and is pretty flat. Also if you are not wearing it, please turn it off. Other wise the bright green light for heart sensor would go on anytime.

The Sonic V08 Talkband has an MRP of Rs 15,999 but the company is retailing it at Rs 9,999. At that price, considering the features I’d say it’s a good thing to have. Most of the fitness bands in the 10k range are pure fitness bands, but the Sonic V08 Talkband comes with a lot of other features apart from being an accurate fitness band. If you want something fancy on your fitness band with exciting features, this is a good thing to have. Wondering how you can save more on this ? Don’t worry we at Socialmaharaj have got exclusive coupons for our readers. Use the coupon code AM500 to get instant discount on their website. Hurry Up !

That was all about the Sonic V08 Talkband HR Smart fitness band. What are your thoughts on this one ? Would you want to have one of these that all you to take calls too ? Whatever are your thoughts, mention in the comments below or tweet to me at @Atulmaharaj

A seasoned blogger and a content marketer for close to a decade now. I write about Food, Technology, Lifestyle, Travel, and Finance related posts. Blogging brings me joy and the best part is I get to read and e-meet so many amazing bloggers! PS: I'm also the founder for Socialmaharaj.com :) Favorite Quote: "Traveling is like reading a book, one who hasn't traveled, hasn't turned a page.
@atulmaharaj
Previous Forks and Folks – My Travel Inspirations. What are yours ? #SayYesToTheWorld
Next Movavi Video Editor Plus: The Windows Movie Maker Alternative