Bring Pixel like camera quality to your photos- GCam for OnePlus If you are into technology, specifically smartphones, you’ll relate to this post for sure. The subtle 1.2 mega pixel camera on decade old phones is now about 48 mega pixels. Gone are the days with single camera as every manufacturer is coming with multiple camera setup today. Telephoto, Wide angle, Depth sensors and what not, the once flat back panel is now becoming a crowded space. And Google with a single sensor was winning hands down.

Google’s Pixel phones have been known for their superior quality photos which many high end phones with multiple camera setup don’t. With immense data with them, they’ve proved that software still can do wonders. 5 years ago, Google decided to make their Google Camera app public and what followed was a number of ports. And this post will be all about GCam for OnePlus phones.

GCam – take your photos to next level

Most of us would agree that Google Pixel phones though priced higher have rock solid camera with latest Android updates. The Pixel 3 XL costs close to Rs 60,000 (It did receive a price cut around the launch of OnePlus 7 Pro). Their new stripped down version of the Pixel 3 – Pixel 3A – is still a good deal at around Rs 35,000 is you need a very good camera phone. And not everyone can afford the Google Pixel 3, while Google Pixel 3A I feel isn’t future proof at that price.

But thanks to Google Cam – GCam – as it is popularly known, it is a a gem for all other phones. Though the official GCam app might not be available for all the phones, the devs at XDA and other portals are ensuring that we get a ‘ported’ app for our phones.

Like I said, GCam ports are out there in the open and you just to find them. Since these are developed by individuals, it’s better to look for a stable version since it might lead to the camera malfunctioning. I did put few of them on my OnePlus 3T and lost many photos since the app crashed and had to restart my phone. For many builds the developers suggest to use a custom recovery or custom ROM. But the one I’m using currently is a stable one. And the photos you get are truly remarkable.

You can clearly make out the difference between a photo from the OnePlus camera and GCam. The one above with GCam is more sharper and has better clarity when zoomed in. It does washes out the sky but that can be tuned. The OnePlus 3T stock produced dull and soft images. Even the color of the trees at the bottom isn’t quite on target.

On the OnePlus 3T, there’s now portrait mode, but with Gcam for OnePlus 3T, there is ! The algorithm is great at finding the edges and blurring the background to give that depth effect and create stunning portraits.

And if you are interested, to check out this reddit post which talks about whether Google should be concerned about the GCam ports or not. Mention your views/feedback in the comments below or tweet to me at @Atulmaharaj

Maintaining the blog for the past 6 years, I'm a Foodie, Techie, Cricket Enthu, Traveler, Blogger and a Cook ! You'll find posts within a wide range of topics from food to technology. Favorite Quote: "Traveling is like reading a book, one who hasn't traveled, hasn't turned a page.
@atulmaharaj
Previous Friends and Food – Saturday Dinner at Mandil HiTech City Review
Next Places to explore in the City of Lakes – Udaipur by boat 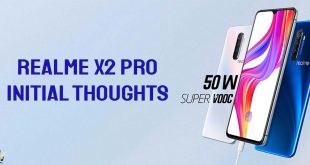 Realme X2 Pro Initial Thoughts – The Good and The Bad

Flagship wasn’t a term a decade ago. It’s only with OnePlus came in and disrupted …