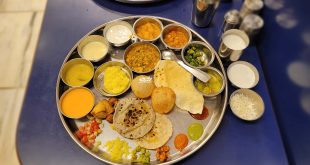 Shree Thaker Bhojanalay – The Best Gujarati Thali in Mumbai – Is it Worth It?

One of the major reasons I love travelling to the Delhi T3 terminal is the superb Delhi metro connectivity. During my last trip earlier this year, I travelled to Noida directly from Delhi airport using the Delhi Metro. It’s not only economical but also fast compared to other modes of transportation. I recently visited Lucknow and seeing the Lucknow Airport Metro station right across the arrivals, I opted for it. So this post is going to be all about the Lucknow Metro and how you can use the Lucknow Airport Metro service.

The Lucknow Metro is a recent addition to the city’s existing transportation options. Vikram and Ram Rath (as known locally) are the most widely used modes followed by buses. The addition of Metro service in Lucknow makes it more convenient to travel to places that otherwise are too crowded or parking is a concern.

Lucknow Metro has a single operational line at the moment. The terminal stations are the Lucknow Airport (Chaudhary Charan Singh Airport) and Munsipulia. Other important stations on the Lucknow Airport Metro route are Charbagh (Lucknow Railway Station), Alambagh (Bus station), Hazratganj (Shopping) and Vishwavidyalaya (Lucknow University) to name a few.

So if you are planning to catch a train or a bus from the airport, the Lucknow Airport Metro service is just for you.

The charges of Lucknow Airport metro depends on where you are travelling to in Lucknow. For my journey from Lucknow Airport to IT college was Rs 50. There wasn’t much rush at the airport so purchasing a token was easy. In case you are a frequent visitor to Lucknow, purchasing a Lucknow Metro card makes sense. The total travel time was about 40 minutes which is lesser than the cab services in Lucknow.

As a comparison, the charges for Uber/Ola cabs is around Rs 400 and around Rs 300 for auto. So if you stay close to a metro station, using the Lucknow Airport metro is quicker.

My Experience of Lucknow Airport Metro

I had an amazing experience using the Lucknow Airport Metro service. It’s economical and faster, compared to any other mode in the city. However, there are a few things to note:

Overall, the Lucknow Airport metro service is an asset to the city and the travellers. I’m sure that when the Lucknow metro expands in the future, a lot more travellers will be benefited from it. Hope you found this information on Lucknow Airport metro useful. Let me know your thoughts in the comments below, Tweet to me at @Atulmaharaj, DM on Instagram or Get In Touch.

A seasoned blogger and a content marketer for close to a decade now. I write about Food, Technology, Lifestyle, Travel, and Finance related posts. Blogging brings me joy and the best part is I get to read and e-meet so many amazing bloggers! PS: I'm also the founder for Socialmaharaj.com :) Favorite Quote: "Traveling is like reading a book, one who hasn't traveled, hasn't turned a page.
@atulmaharaj
Previous Is Comptia A+ certbolt Certification relevant in 2021?
Next My First Trip to Odisha – Few Hours in Bhubaneswar