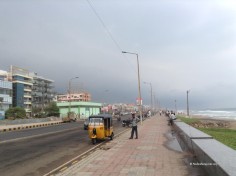 This is the first part of the two part series of posts on Places to Visit in Visakhapatnam. The two posts have been divided based on the geographical locations of the places. So in this post will be talking about Ramakrishna Beach popularly known as RK Beach and its surrounding areas which includes destinations like INS Kursura, Visakha Museum and the shopping destination Jagadamba Junction.

One of the most well known places in Visakhapatnam is the Ramakrishna Beach or RK Beach. The beach is roughly about 3-4 kms from the Railway station and about half the former distance from the shopping destination Jagadamba Junction. The beach road is the place to be in Visakhapatnam, the entire stretch has been developed considering the huge number of tourists flocking to the city. The road is pretty good and have pavements on either side for the walkers and the joggers. On the beach front, a long stretch of concrete area is built up so that people can sit for long hours and whilst having a great view of the Bay of Bengal in front and the Visakhpatnam Port on the side. The best time of the day to visit this is early morning or evening. In evenings there are a lot of stalls set up on the pavements. The stalls serve everything from peanuts, jhalmuri, chat, to sweet corn and other items. On the other side of the road one can find lot of food joints, kid rides and a lot of idols of iconic personalities in Indian history.

The INS Kursura museum is attached to RK Beach. According to the guide inside the museum, there are only three submarine museums in the world, out of which 2 are in the U.S. and the third one is in Visakhapatnam. This surely is a hatke (different) museum. Not the type of typical museums I’ve seen up till now. There is and entry fee which is 40 Rs for an adult. Since I was carrying my camera, had to buy an extra ticket for her which costs 50 Rs. Once inside, there are boards depicting the history of the submarine, when it was commissioned and decommissioned along with its vital statistics

Since there isn’t a lot of space inside the submarine to move about, there are only a certain number of visitors allowed inside at once. There are chairs places outside so that you can wait for your turn. On the outside you can find Torpedos, Sonar et al. Once inside it’s pretty cold, the AC works perfectly. You will be surrounded my knobs and dials all around. The first chamber houses 18 Torpedos and what is called sea mines (water equivalent of land mines) I totally got a feeling of some National Georaphic Megastructures series. As and when you move further inside, you’ll see various chambers like staff quarters, kitchen, Sonar room, etc. This surely is a must visit for all. Across the road is the Visakha Museum which looks quite small from the outside but has quite a few things on the inside.

Every city has its own shopping destination, be it Shivranjani in Ahmedabad, Jayanagar in Bangalore, Aminabad in Lucknow, Koti in Hyderabad or the Jagadamba Junction in Visakhatpatnam, you surely will find what you need. Jagadamba has lot of garment stores on either side. Apart from garment a lot of footwear  stores are present. You can find a lot of restaurants too, from cuisine specific to fine dining and pocket friendly. Since I’m more of a budget traveller my preferred choice of restaurant are from the third category. And because I was in Visakhapatnam, the only place where I ate was a mess serving the typical unlimited meals which filled up my stomach without burning a hole in my pocket 😛

So that’s all in this post, read on to know more about other places in Visakhapatnam. Read my next post Places to Visit in Visakhapatnam Part II. As always, feedback, suggestions, corrections are always welcomed, so keep them coming 🙂

A seasoned blogger and a content marketer for close to a decade now. I write about Food, Technology, Lifestyle, Travel, and Finance related posts. Blogging brings me joy and the best part is I get to read and e-meet so many amazing bloggers! PS: I'm also the founder for Socialmaharaj.com :) Favorite Quote: "Traveling is like reading a book, one who hasn't traveled, hasn't turned a page.
@atulmaharaj
Previous Zomato, Uber, Oyo is all that a traveler needs today
Next Places to visit in Visakhapatnam – Zoo, Kailasagiri Part II 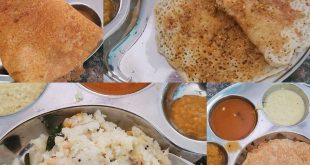