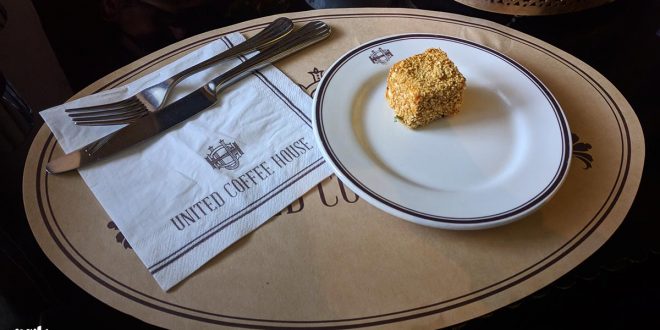 What Seoul is for women for fashion products, Delhi is for foodies. It’s that one city in India that has an extremely rich variety of food. The city is an amalgamation of age-old recipes from the Mughals to the Punjabi tadka and of course the chat. Over the years, the food culture has evolved immensely in Delhi. You have big brands from other city setting their shops here. From World-famous Hyderabadi Biryani at Paradise to the delicious idlis and dosas at Sarvana Bhavana, there’s everything in Delhi. However, there are few eateries that are keeping the legacy alive. One such place that I was at is the United Coffee House.

Little did I know that the place that we were meeting at has a legacy behind it. While I was fascinated with the decor, I was unaware of the past of United Coffee House Delhi.

The cafe dates back to the days when Delhi & Lahore were part of the same country. While the Britishers had built Connaught place as a shopping hub, it lacked a coffee place. That’s when Hansraj Kalra, a businessman from Sialkot established the United Coffee House in the heart of Connaught Place. The family later moved to Delhi. The idea was to have a place where people could meet and talk over some food and coffee.

Over the years, many restaurants have come and gone, but United Coffee House Delhi stood the test of time. While their European style interiors are still intact, the menu kept evolving with time to catering to the changing palettes.

A big banner and a huge brown door with golden details are what separates the Delhi of today and the Delhi of yesteryears. Once you’re inside, you’re welcomed with grand chandeliers along with intricate walls. The high rise decorated ceiling reminds you of the legacy this place has with it.

Though the restaurant isn’t large and can feel congested at times, when you are bonding with friends, that doesn’t matter. The cutlery too adds to the ambiance which keeps reminding you of the rich past of United Coffee House Delhi. I do wish they had a wall/area dedicated to showcasing the growth of the place over the decades for people like me.

I keep telling people that when you dine out there are two main reasons for it. Either you are going just to eat or you are going to meet friends/family over a meal. In the former scenario, your complete attention is on the food while in the latter case, your focus is on meeting friends and foods take a back seat. The latter was my case when I visited United Coffee House Delhi in Connaught Place.

Since we met over brunch, we kept it light. We ordered a Cold Coffee along with a Cona Coffee. Since most of us weren’t quite interested in eating, we ordered something light. I was suggested to try the Mewari Papad Paneer here. We discussed everything from blogging, food stories, digital marketing, and stories of how we met on Twitter.

In a quick time, we had our order at the table. The Cona coffee was served quite elegantly. I’ve seen the normal home setup for preparing a cona cafe. However, the way this was served was interesting. The cold coffee that I had ordered was pretty good. The sweet level was maintained and did have a tinge of bitter coffee flavor to it.

Coming to the Mewari Papad Paneer, it was a combination of flavors. Chunks of Paneer coated with Papad along with a dash of aachar. The saltiness and crunchiness of the papad coupled with the tanginess of the achaar made a perfect medley of flavors. A highly recommended dish here.

I had a good time there, more than the food, I enjoyed the company of my friends and also the stories associated with the outlet. Next time you are in Connaught place, you might want to check this place out. If you are from Delhi, have you visited United Coffee House? What are your thoughts about this place? Let me know in the comments below, tweet to me at @Atulmaharaj, DM me on Instagram, or Get In Touch.

A seasoned blogger and a content marketer for close to a decade now. I write about Food, Technology, Lifestyle, Travel, and Finance related posts. Blogging brings me joy and the best part is I get to read and e-meet so many amazing bloggers! PS: I'm also the founder for Socialmaharaj.com :) Favorite Quote: "Traveling is like reading a book, one who hasn't traveled, hasn't turned a page.
@atulmaharaj
Previous My First TV Shoot for Bournvita Quiz Contest in Kolkata
Next Send your name to Mars forever – I’m Not Kidding!