Food For Reels – Thanks Instagram, You’ve ruined my food!

So you’re casually browsing Instagram and come across a reel. It’s a fancy dessert, with chocolate being poured over it. The shell of the dessert breaks, and you get a brownie inside. On that brownie, white sauce is poured and you see a chocolate fountain oozing out of the brownie. Fascinating, isn’t it? I’m sure you’re wondering why haven’t you come across such a reel yet? Well, there isn’t anything like this. Instagram is full of such things today. Being a Food Blogger (unlike other folks calling them bloggers without even having a blog) I do like to see such stuff once in a while. However, over the past few years, I feel that Instagram has ruined my food.

Read this post till the end to know why I say so. And I’m sure if you are a foodie or someone who eats out often would somewhere agree with me.

Many of the gen-z and millennial folks would imagine the pre-Instagram age as the pre-historic era when we invented fire and the wheel. For them, a world without Instagram (or social media for that matter) is unthinkable.

Recently someone asked me since when I was blogging, I told me 2010. The quick reply was, “Hey, but there was no Instagram back then!” Well, someone tell that kid that Instagram is not a blog and Instagrammers are not Bloggers!

I’ve been dining out for ages now. There were restaurants and street food vendors back then too. And the food tasted much better in general then, I feel. From having vada pav at Pradeep Vada Pav in Maninagar, Ahmedabad to having South Indian food at Hotel Sudha in Ellora Park, Baroda. The food was simple and good. The restaurant didn’t feel the need to lure their customers with anything fancy, their regular food itself was enough to pull them. I remember there were so many food joints and carts that I used to visit for a particular dish. All of those were simple and delicious. Nothing overboard. Ever.

Instagram has become quite popular over the years, both brands and users have been greatly affected by it. For users, it has become a great way to learn about new places. They can “see” a place or thing even before they visit it. For brands, they have got access to a large customer base to tap in. With the rise in the number of Influencers, brands are able to reach more and more targetted people.

For restaurants, it has become a great way to attract more eyeballs and go viral. I can’t comment on the footfall, but surely a lot more people know about a restaurant today. Hence to gather more eyeballs, restaurants do a lot of things, from having a great ambience to good looking food.

However, during that course, they cut corners which affects the quality and taste of food. So many a times, what you see and what you get, are totally different.

Being in the food influencing and food blogging space for close to a decade, let me tell you why I feel that Instagram has ruined my food (& dining experiences at times)

When I started writing, I had written a post on Taste, Aroma and Looks – what is important for you. This was basically around food. For some, the looks mattered, for others the aroma and for someone else all of them. Similarly, when you hunt for a restaurant, the way it looks helps you decide where to it. I wouldn’t be wrong, but more than 80% of people would visit a restaurant that ‘looks good‘. Thanks to the influencers who actually make a restaurant look good.

Hence to ‘look good’ many restaurants today are focusing more on the ambience than the food. From swanky interiors, huge birds and waterfalls to large open spaces. Restaurants today put a lot more focus on how they look. They even create ‘Instagrammable corners‘ for customers to click photos and tag them on their stories and posts.

While all this is good, somewhere in the process, they lose focus on their food. I’ve been to so many places that had Instaworthy Ambiance but absolutely average food. At such restaurants, you actually pay more for the ambience than the food.

On the flip side, I’ve also come across restaurants and cafes that look good and serve good food. Just that the number is pretty small compared to others.

How many of you saw reels of Oreo Pakoda, Brinjal Momos, Pineapple Ice Cream Sandwich, Bahubali Thali, Double Decker Haleem or anything similar? I’m sure 9 out 10 people would have seen it. In fact, 7 out of those 9 folks would have even shared it with their friends. That’s when Instagram thinks’, “okay this reel seems good as people are sharing, let me push it further” It reaches more people and gains a gazillion views. The restaurant has overachieved its target of going viral with its ‘good looking food‘ but what about the taste?

In the race to go viral quickly, restaurants and food joints are coming up with food for reels. These dishes are often gimmicky and involve a lot of DIY stuff like pouring, breaking, throwing and whatnot. Since every influencer wants to be a millionaire, they shoot this and post it with a dream of going viral. Some go viral, many don’t. In that whole views and reels race, there are a handful of people like me who feel that the food has lost its charm.

I mean give me a plate with rice and rajma poured over it. I’ll be more than happy. I don’t want a pull-me-up Rajma Chawal, where I pull up something and Rajma pours over the entire plate. No.

“Bhaiya aur butter daalo”,”Bhaiya aur cheese!”, “Bhaiya hum aapko viral kardenge!” – are phrases that new kids with iPhones use to appease the vendors for their own benefit to get views. Many of them won’t even eat that plate. In the race of being the king of views, queen of followers, influencers too in a way are forcing restaurants and food joints to go out of their way and create something that ‘looks good’.

My Instagram feed is full of Alphonso ice cream and double-decker haleem at the moment. While influencers are busy creating reels and stories, many customers aren’t amused by it. There are only a handful of people on social media who genuinely appreciate good food and call out wherever the food wasn’t great. We need more people like them to help us bring back the lost flavours.

So where to eat?

There are so many good places out there that serve genuinely good food. Some of them even have all the gimmicks, yet are able to focus on the quality & taste. It’s just that places like these don’t rely too much on Instagram. Due to this, they don’t interact much with the influencers by giving out free food. And hence you don’t see such places on your feed. It’s that simple. There is also a trend these days to come out with reels around “hidden gems” and roadside eateries, some of them are genuinely very good.

So the question is where to eat? I think the best way to do that is to reach out to your near and dear ones for their suggestions. You can even reach out to your favourite influencer over DM and ask them for recommendations. You’d be surprised to see many of them recommend places that might not even be on Instagram. This has always worked for me.

Moreover, there are a lot of genuine foodies who aren’t active on Instagram, so you should go out of Instagram to find them. Check out the Foodies groups on Facebook in your city, or check out people on Twitter. If someone has a blog that you like to read, go and subscribe to them.

I’ve had quite a few situations in the recent past when I thought that the food could have been much better than what was shown. I don’t know how many of you reading this would actually agree with me, but this is what I feel.

If you have any opinions around, please drop them in the comments below. You can also share this and tag me on Twitter, and Instagram to share your thoughts. If you don’t want to go public, you can always DM me or Get In Touch.

A seasoned blogger and a content marketer for close to a decade now. I write about Food, Technology, Lifestyle, Travel, and Finance related posts. Blogging brings me joy and the best part is I get to read and e-meet so many amazing bloggers! PS: I'm also the founder for Socialmaharaj.com :) Favorite Quote: "Traveling is like reading a book, one who hasn't traveled, hasn't turned a page.
@atulmaharaj
Previous Fantastic Food, Music & Drinks at Terrace Mercure Hyderabad – Review
Next Taaza Kitchen – Delicious Breakfast at Taaza Thindi’s Hyderabadi Cousin 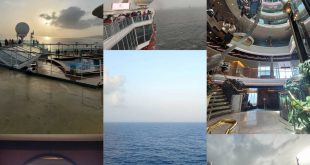