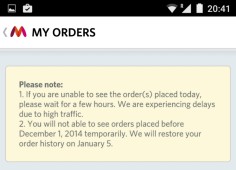 The much awaited Myntra End Of Reason Sale 2015 which began today at 8 AM, started of pretty good. The sale was scheduled to go on till Sunday, 4th Jan, 2015, but due to a great response and items moving out quickly, the sale will end at 11 PM tonight (January 3, 2015) as the retailer is out of stock for most of its item. A confirmation of the same on its mobile app.

However, the retailer has definitely learnt from the mistakes its Daddy Flipkart did during the Big Billion Sale. Flipkart was at the receiving end of customer’s anger as its servers weren’t equipped to handle the huge rush.

But Myntra ensured that it didn’t face such issue, hence it limited the number of customers online at once to a certain amount. Thus when some users tried to access the site they were greeted with a message “Your shopping will start in some time(a timer running below) as our servers are running at full capacity, we are trying to sneak you in” A picture of the orders page on its mobile app.

This strategy worked well for Myntra but some customers were unhappy and took their anger to the micro blogging site – Twitter.

All in all the sale was good and the prices were rock bottom, I was luck RO have got access at 8 AM and ordered everything that I wanted 😉

A seasoned blogger and a content marketer for close to a decade now. I write about Food, Technology, Lifestyle, Travel, and Finance related posts. Blogging brings me joy and the best part is I get to read and e-meet so many amazing bloggers! PS: I'm also the founder for Socialmaharaj.com :) Favorite Quote: "Traveling is like reading a book, one who hasn't traveled, hasn't turned a page.
@atulmaharaj
Previous My Blogging report card ;)
Next Make way for Redmi 1s – trick to get yours too ! ;) 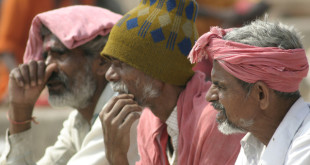