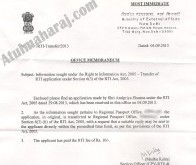 Yes, you read it right, It has taken close to 8 months for the Passport Dept. to to issue me a Passport. Had been running form pillar to post in the past few months to get this done. Finally relieved ! Though there is no time duration mentioned for passport applications under normal category, 8 months is not the what one would expect, at least I don’t expect ! View my complete Passport experience and procedure here.

The journey began with great joy , thanks to the amazing service at the Passport Seva Kendra. Impeccable service (this only when your documents are complete and according to what they need, if its not, you might not find the above statement true.) With state of the art facilities and friendly officials, the experience was good indeed.

But as time passed, the so called Customer Service et Satisfaction decreased. Mean to say all the under-table activities are something I would throw light at. But before I list those, I would definitely like to mention the official at the police station, Ahmedabad. A great person, who stuck to his duty, did his job without any chai-paani ! Salute to such a man ! Respect !

Now moving on to the chai-paani stuff. As one would expect these activities are part and parcel of the process of obtaining a passport. The official fee of the passport set by the government is Rs. 1500 for normal scheme. Wonder what to say, but the chai-paani costed me more than 100% in addition to the official fee. I would have never done this, but I had a strong feeling that I wouldn’t receive a passport until I became a Grand Father so had to indulge in the chai-paani… So here’s a possible breakup of what you could expect.

Being an enthusiast in learning about the government machinery, I did file my first Right to Information application to know that status of my application. Thanks to RTI that I realized why it took so much time. I had a total of 3 police verifications – first one being within a week of filing the application, second one being at my permanent address and the last one again a repeat telecast of the first one. Strange ? If you faced a similar issue, please let me know.

A seasoned blogger and a content marketer for close to a decade now. I write about Food, Technology, Lifestyle, Travel, and Finance related posts. Blogging brings me joy and the best part is I get to read and e-meet so many amazing bloggers! PS: I'm also the founder for Socialmaharaj.com :) Favorite Quote: "Traveling is like reading a book, one who hasn't traveled, hasn't turned a page.
@atulmaharaj
Previous 'Sachincredible' Sachin
Next Nexus 5 launched in India and out of inventory already.