Continuing from where I left my last post at the spectacular St. Philomena Church, it was time to visit the most popular tourist attraction in Mysore – The Mysore Palace. Most of the websites, travel portal will list Mysore Palace as the number one attraction in Mysore and that’s where most of the crowd is. Just as I mentioned in my previous post, most of the places of attraction Mysore are in close vicinity of one another and the palace is no exception to this.

A 20 minutes drive in a cab from St Philomena Church will take you to the Royal Mysore Palace. The palace has multiple entrances, however the tickets are available only at one of the gates. So while you would be driving to the palace you would come across the main gate. The ticket counters are heavily crowded but the the crowd is fast moving so you don’t have to spend much time in queue. The ticket prices are fixed at 60 Rupees for an adult which includes the entry to the palace as well as a tour inside the palace.

The Mysore Palace which faces the Chamundi hills is the official residence and seat of the Wodeyars – Maharajas of Mysore. The palace doesn’t have a distinct form of architecture like the ones by Mughals in the northern part of India. Mysore Palace is a blend of Hindu, Muslim, Rajput and Gothic styles. The palace has two durbar halls where most of the ceremonies take place. Further just like any other palace, it houses a Diwan-i-aam and a Diwan-i-khaas chambers. One of the distinct things about the palace is that most of the walls of important halls are painted with gold. Further the ceilings of the halls are very beautiful. (Couldn’t get pictures as cameras aren’t allowed inside the palace)

The palace is home to Karnataka’s most famous festivals Dasara. Every year there are thousands of artists preforming during the festival at the palace. The highlight of the festival is that the Mysore Palace is illuminated with more than 96,000 lights during the two month period. Also the palace light illumination takes place between 19hrs and 1945hrs on every Sunday, so you surely shouldn’t miss out on this if you happen to be in Mysore on a Sunday.

Overall, the Mysore Palace is worth the time. The architecture along with the paintings are the highlight of the palace. However if you have visited palaces in Rajasthan, Delhi or Agra then you might not find this one that interesting. In my view, Mughals and Rajputs built huge palaces and one would get tired walking and many a time fail to visit every corner of the palace. So the Mysore Palace isn’t very big, but the fact that the king still stays there and the gold paint is what makes this special.

So plan a trip to Mysore and take a couple of hours to visit the royal Mysore Palace to witness the legacy and the riches of the Maharajas of Mysore.

So after the Rail Museum, St Phliomena Church and the Mysore Palace, I’ll take you to the Mysore Zoo in my next post in Mysore Diaries. Till then enjoy and have a great time 🙂

Maintaining the blog for the past 6 years, I'm a Foodie, Techie, Cricket Enthu, Traveler, Blogger and a Cook ! You'll find posts within a wide range of topics from food to technology. Favorite Quote: "Traveling is like reading a book, one who hasn't traveled, hasn't turned a page.
@atulmaharaj
Previous Beginner’s Guide to Facebook Ads
Next The Powerhouse Review – Mi Power bank 20000mAh 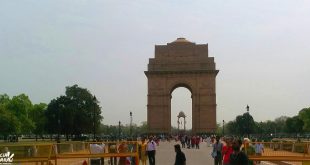 6 weekend destinations from Delhi you should visit

Being a resident of Delhi is every traveler’s delight. You’ll never run out of places …