Sharma vs Shukla - Who Has The Best Chai in Lucknow? 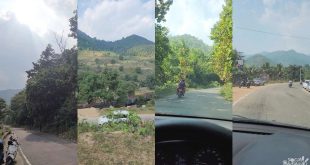 Most mornings in the city of Bengaluru, you’ll find people from walks of life relishing their Dose with a hot cuppa of filter coffee. Filter Coffee is often associated with Bengaluru (entire South India by most) However, things change when you towards the north. The aroma of coffee ceases as chai comes into the picture. Large parts of India is obsessed with chai. Chai is an emotion in India. Whether you are happy or sad, in love or in distress, chai is the magic potion you need.

Every city in India has got that one shop/stall that is known for its chai. Just like Hyderabad has Nimrah Cafe known for its Biscuits and Irani Chai, Lucknow has got its very own Sharma Ji ki Chai. Both, completely different from each other yet a favourite of the locals. And yes, Nimrah is not the only place in Hyderabad where you’ll find good chai. There is Niloufer, Blue Sea to name a few. Similarly, you can have chai in Lucknow at a lot of places – Shukla Tea Stall in Hazratganj being one of them.

I’ve tried the chai in Lucknow at both Sharma Ji ki Chai and Shukla Tea Stall and I think, it makes perfect sense to pitch both of them against each other. In this post, I’ll discuss who has the Best Chai in Lucknow Sharma vs Shukla.

Battle of the Best Chai in Lucknow

Both Sharma Ji Ki Chai and Shukla Tea Stall are great in their own league. While Sharmaji has become an iconic place for locals as well as tourists, Shukla Tea Stall is still a modest one. Blame it to the location, Sharma Ji has got ample space to cater to large groups of people while Shukla has a rather small establishment that can house about 10 people inside while the rest have to stand and eat or order them in their cars.

When it comes to preparing chai, there are a thousand ways to prepare it. In fact, I say that one of the toughest things to prepare is Chai. That is because every person has their own, unique way of making chai.

The preparation method of Chai at both Sharma Ji ki Chai and Shukla Tea Stall is more or less the same. Just like the Irani Chai made at Nimrah Cafe in Hyderabad, the Chai here is made using decoction. They have a huge vessel with Tea decoction which they pour into glasses and top up with milk. Because of the huge demand at Sharma Ji ki chai, it’s a batch process as he just pours decoction and milk in a lot of glasses at the same time. It’s otherwise at Shukla Tea Stall.

The Real Taste of Chai

Disclaimer: Like I mentioned above that there are a gazillion ways to make Chai, every person has their own taste for Chai. Some want it milky, some want it watery, some want Masala in it, some are happy with Ginger and Elaichi. Hence, my take on the Best Chai in Lucknow might be different from yours.

Sharma Ji ki chai has become a popular spot and is visited by hundreds (if not thousands) every day. So they make huge quantities of Chai. If you are someone who wants the chai to have some flavours, this might not appeal as there’s no flavour to the chai here. I love my chai to have lots of ginger or cardamom or masala. Hence this seems bland. Also, the milk to water ratio is less, which means for some of you, the chai will feel watery. No doubt that the chai is good and one of the best chai in Lucknow.

Chai at Shukla Tea Stall is different. From the two kulhads I gulped there, I realized that they make use of cardamom in chai. This means that the chai is a lot more flavorful and aromatic when compared to Sharma ji ki chai. Talking about the milk to water ratio, it’s better than Sharmaji ki Chai but not as milky as the Irani Chai. Having been here only once, I don’t know if it’s right to say that this is the best chai in Lucknow.

Sharma vs Shukla – Who’s The Winner?

I’ve been to Sharma Ji ki chai multiple times and have always found a different taste. For instance, on my recent most visit, the chai wasn’t done well and I could see that the Milk had curdled and yet there were hundreds of people waiting to get their Chai. Shukla Ji on the other hand is a small establishment sans bling bling serving up some good chai.

Hence if I were to award the Best Chai in Lucknow, it has to be Shukla Tea Stall. Their chai is much more flavorful and has a rich body and texture. It tastes perfect and when served in kulhad, it’s the perfect kick you need to start your day. Pair it with a plate of Pakodas and Bun Makhan and you won’t be disappointed.

If you’ve been to Lucknow, where have you had chai? Who do you think serves the Best Chai in Lucknow? Let me know your thoughts in the comments below, Tweet to me at @Atulmaharaj, DM on Instagram or Get In Touch.

A seasoned blogger and a content marketer for close to a decade now. I write about Food, Technology, Lifestyle, Travel, and Finance related posts. Blogging brings me joy and the best part is I get to read and e-meet so many amazing bloggers! PS: I'm also the founder for Socialmaharaj.com :) Favorite Quote: "Traveling is like reading a book, one who hasn't traveled, hasn't turned a page.
@atulmaharaj
Previous Cafe Repertwahr Review – Lucknow’s New Instagrammable Cafe
Next 10 Best Vegetarian Food in Lucknow You MUST Try