If Banjara Hills was a person that would be me for sure. Having ‘lived‘ in 5 states, across 8 cities does make me a Banjara. Most of it happened during my childhood, and that made me experience a lot of cultures including languages and food. I’m a polyglot and can speak a lot of languages and I’m also a big-time foodie who enjoys exploring food.

My taste for South Indian food, especially dosa and Idly started pretty early, around the time I was in 1st grade. My neighbours were from Palakkad, and I was on their breakfast guest list every weekend. Aunty used to prepare these yummy crispy dosas along with authentic sambhar and red chilly chutney (Lal chutney, aunty/chechi if you’re reading this, I still miss that lal chutney)

My Love for dosas started then and it has only grown over the years. I have had dosas at some of the best places I’ve stayed at. From the iconic MTR restaurant in Bengaluru to Govind ki Bandi in Hyderabad, I’ve tried them all. One outlet that I had heard about a lot of late was Panchakattu Dosa. It had been on my list for a long time, and I finally visited it for breakfast last week with one of my foodie friends. So this is going to be my Panchakattu Dosa Review and if you love dosas, you must read this till the end!

All of us have that one place that we absolutely loved during our childhood days. Be it an uncle selling samosas or an aunty selling Punugullu. The same was the case with Naga Chilamakuri. A resident of the small town of Tadipatri in Andhra, Naga grew up eating dosas at a small shack. The shack didn’t have a name, but the dosas were a brand then. The soft and crisp dosas had made quite a name in the small town.

A manager at an IT firm, Naga decided to quit his job to learn the nuances of the food business. And on that journey, his love for dosas became his lifeline & hence Panchakattu Dosa was born. He learnt the tips and tricks from the man at the dosa shack in Tadipatri and tried to replicate them at Panchakattu dosa. Since that place didn’t have a name and the man used to wear a dhoti (Panchakattu in Telugu), he decided to name his food venture Panchakattu dosa.

From Food Truck to Food Stall

A dream of every IT employee which never turns to reality is a food truck. One of the common chatters among IT employees during a tea break would be around starting a food business. Not all of them take off, but Naga’s case was different. He turned his love for dosas into a reality with Panchakattu Dosas.

It all started with a characteristic orange-coloured Food truck, also the colour of their hot Mirapakaya chutney. It used to be stationed in the Kavuri hills area dishing out some hot dosa, uttapams and idlis. Soon it became a favourite of IT folks working in the area and the name became popular. It was around last year I saw most of my foodie friends visiting the place for food tasting sessions. And being a dosa lover, I so wanted to try it. But as they say better late than never, I finally visited Panchakattu Dosa last week at their relatively newer outlet in Banjara Hills which isn’t a food truck.

If you’ve eaten dosas at different places, you know that every region has a different type of dosa. For instance, the dose from Namma Bengaluru is known for being fluffy and crispy at the same time. The ones served at bandis in Hyderabad on the other hand are super crispy and loathed with butter. Panchakattu Dosa reminded me a lot of the dosas from Bengaluru, fluffy and crispy.

The outlet is located in one of the lanes opposite KBR park in Banjara hills and can be spotted from the main road. It operates from 7 – 11 AM in the morning and from 5 to 11:30 PM in the evenings. It is located in front of a boutique hotel and it was surprising to see that a hotel allowed a food joint to operate right in front of it.

Since it was two of us, we decided to try an item each from their menu which isn’t expansive. We had my favourite Ghee Karam Idli, Karam Palya Dosa, Neeryai Ghee Karam Dosa along with a glass of Nannari each. Though it’s a small stall, it can get pretty crowded and the waiting times can increase. They in fact have a board that reads “we roast dosas both sides on a low flame and hence it takes more time” But since we were the first ones there, it was relatively faster.

Starting with the Ghee Idli, they were large and soft. Not as soft as the ones you would find at say Royal Tiffin Center or Govind Ki Bandi, but they surely were melting in mouth. It had a generous amount of ghee and Idlis were soaked nicely. The Karam Podi looked fiery but it was quite flavorful. Their coconut chutney was rather spicy for me. Overall, the idlis were pretty good.

Coming to the dosas, we saw them being made. Two things that you’ll instantly notice, first the generous amount ghee that goes on it and second the red Karam podi. As the board read, the dosa indeed is given a fair treatment giving it the fluffiness and crispiness. It was served along with palya – aloo curry you get with dosa, tangy and spicy mirapayaka chutney and the coconut chutney.

Though it is a Rayalaseema dosa stall, the Dosa as I mentioned earlier, reminded me a lot of the dosa from Bengaluru. Crispy on the outside and soft from the inside. The dosa had the perfect texture and colour – the result of perfect cooking. Every morsel of the dosa had an aroma that teased my senses and taste that made my taste buds go My Dil Goes Ummm…..

Coming to Nannari, it’s become one of my favourites. I first had it at the Aha Rayalaseema Food festival at Rayalaseema Ruchulu a few years ago. Nannari is basically a type of plant, also known as Anantmul in Hindi. It has been mentioned in Ayurveda as a cure for constipation and acidity. The extracts from the root are used in syrup, served with a dash of lemon. Trust me, if you haven’t had it earlier, you must try it. It has a distinct taste that doesn’t have fruity notes but is quite sweet. The one we had here seemed aerated, but none the less it was quite refreshing, a perfect way to end the meal.

Final Verdict: Head to Panchakattu if you love Dosas

As a dosa lover myself, I highly recommend you visit Panchakattu Dosa. And as you might have guessed, I wasn’t here on an invite. Dishes are priced nicely, we paid about Rs 330 and I’d say it’s a total paisa vasool breakfast. Though the doas had a generous amount of Karam, and the place is known for Rayalaseema flavour, things weren’t as spicy and fiery as I had thought.

This place is visited by a lot of morning walkers from KBR park. A routine that I’d love to follow. Start with a walk at KBR and end with a crispy dosa at Panchakattu.

Also, to the pretty lady who walked up to me, asked if I was a food blogger and followed me on Instagram, if you’re reading this, I hope you agree with my views of Panchakattu dosa. Do let me know your thoughts 🙂

Overall, a must-visit place and I’m surely going back with my parents soon. Panchakattu Dosa is a place that you should visit to eat and not get things delivered in my opinion. The true essence is eating dosas there itself. I had too much fun eating it, writing this & walking down memory lane.

I hope you liked this review of Panchakattu dosa. Let me know your thoughts in the comments below, tweet to me at @Atulmaharaj, DM me on Instagram or Get In Touch.

A seasoned blogger and a content marketer for close to a decade now. I write about Food, Technology, Lifestyle, Travel, and Finance related posts. Blogging brings me joy and the best part is I get to read and e-meet so many amazing bloggers! PS: I'm also the founder for Socialmaharaj.com :) Favorite Quote: "Traveling is like reading a book, one who hasn't traveled, hasn't turned a page.
@atulmaharaj
Previous TailorsIn.com Review – Pick, Stitch & Deliver – Tailors in Hyderabad
Next Visiting Akshaya Patra Kitchen – Ultimate Mega Kitchen in India 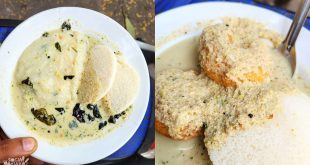