In my childhood days, I remember playing with a red formula car by racing it on the railings of my balcony. I used to run from one end to the other racing my car unaware of all the things happening around. And today I sip my hot coffee along with …

He has been called by various names likes Master Blaster, Tendia, and he has terrorized many bowlers in his lifetime by his destructive batting over the years. No one could have ever imagined that a young kid of a mere age of 16 would one day go on to re-name the Record …

The combined stats of the Gods Of Cricket. Do I need to say anything more ??

Time for the legends to call it a day Sachin Tendulkar and Roger Federer have been the best ambassadors possible for their respective games. Both Tennis and Cricket have had a large number of people following for the sole reason being their presence on the field. But the recent slump in their form have prompted the critics to go …

Who would have thought that this edition of the Ashes would start in this form ? I felt the depleted Australian side will surely come hard at the British batsmen, and it happened just that way. Pattinson and Siddle uprooted the stumps of the English batsmen as they were bundled … 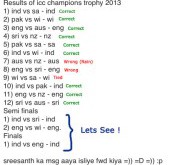 Just at the time the Champions Trophy started, I an image which basically had the outcomes of all the matches of the tournament. (I had got it on the day of India vs West Indies match) Since then only 3 predictions have gone wrong if we go according to the image. So here’s …

Most of you would know why the title – Dhamakedaar Saturday – but for those who aren’t aware, then let me take the opportunity to inform you that India will be taking on Pakistan in the Champions Trophy Match on Saturday, in short – Mother of All Cricket Matches awaits !! Looking at the …

Last night’s game was low scoring by Pakistan did very well to delay the loss. Else if Gayle would have started going boom boom, match could have finished within the first 20 overs ! Bowling is the strength of the Pakistanis but their batting needs huge improvements ! Let’s talk about today’s …

Yaay !! India won last night’s match handsomely. But the match swung like a pendulum the whole time, sometime it felt like the Proteas would take the game away easily from the Indians while sometime it was like, no it’s India who will win ! As far as the team …