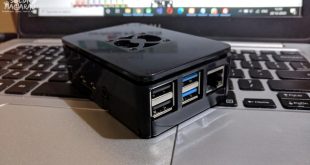 I’ve always been fascinated by apps and tools that simplify our lives. From helping us calculate the mileage of our vehicles to helping us become fit. While I did engineering going with the flow, I do love to create apps. I wouldn’t call myself an ace coder or the geek who knows everything. However, I know the functional aspects of a lot of things from web development to Android to Azure and AR/VR as well! So when work from home started for me, I got some time on hand to rekindle my hobby of tinkering and explore. And that’s when I decided to get a Raspberry Pi 4.

I’ve already used an Arduino Uno back in college and did some tinkering on it using LEDs, motion sensors, Java programs, etc. But Arduino is quite restricted in my opinion. While I’ll talk about the Raspberry Pi vs Arduino in a different blog post, in this post I’d like all of you to meet my new Raspberry Pi 4!

What is Raspberry Pi?

Before I talk about what is Raspberry Pi, I need to explain a few things that will help you understand Raspberry Pi better.

I’m sure most of you would have seen a desktop computer and some of you might even know that components inside a desktop computer can be added/removed. So you can have a new processor, RAMs, increase storage, use a graphic card, etc. While this is at one end of the spectrum, we have something called a single board computer or SBC at the other end.

Single-board computers as the name says is a computer built on a single circuit board. SBCs don’t rely on expansion slots like desktops and everything is available on that single board. From the processors to RAM, WiFi, LAN, etc. everything is on this single board computer. Single-board computers are often used for development purposes or educational purposes. These are great for showcasing prototypes, proof of concepts, etc. Their size, features, and price make them perfect for such tasks.

When you talk about single board computers, one of the most popular names that come up is the Raspberry Pi. Raspberry Pi is a single-board computer developed by the Raspberry Pi foundation. It comes with features like a USB port, display ports, Ethernet ports on the device which makes it a good basic level computer in itself. The credit-card-sized computer also allows you to connect sensors and other IoT devices to it which can be programmed for various use cases.

Further, one thing to know is that the board is sold without any accessory, even without a power cable. So you need to purchase them separately. Since this was my first Raspberry Pi, I decided to buy a Raspberry Pi Combo Kit that comes with all the essentials like the case, cables, memory cards, manuals, etc to kick start my journey on the Raspberry Pi 4 4GB.

Now that I had time on had, I wanted to spend time learning and tinkering with IoT devices, work on some small real-life projects that I wanted for my house, etc. And for that, the Raspberry Pi 4 seemed perfect. It comes in 3 variants – 2GB/4GB & 8GB RAM variants. 2GB I felt was quite low while 8 seemed like a stretch. The Raspberry Pi 4 4GB hit the sweet spot both in terms of functionality and the price as well.

In terms of features, the Raspberry Pi 4 4GB packs a lot of punch making it a perfect device for tinkering. It can do almost everything a proper computer can do.

Those are the features of Raspberry Pi 4 4GB. Doesn’t it pack a punch? There’s almost nothing that I cannot do with it. The GPIO headers can be configured to work with any sensors, code for which can be written in Python or any other programming language. And that’s another reason I got the Raspberry Pi 4 4GB. I can learn Python on it along with getting used to the Linux ecosystem by using commands and networking etc. Also helps me become proficient with my digital ocean VPS server as well 🙂

In terms of performance, the Raspberry Pi 4 does pack a punch. Browsing on Chromium with 3-4 tabs on is a breeze. Also, the fact that Raspbian is a Linux distro, it’s pretty neat and light in terms of memory usage. The default OS doesn’t come with many software like office, paint, etc. so you need to install them based on your requirement. I’ve already one a couple of beginner projects about which I’ll share in the future posts 🙂 Overall, I’m totally loving my Raspberry Pi 🙂

Check Out My First Raspberry Pi Project – Push To Tweet!

Things you can do with Raspberry Pi

This means even if you keep it running 24×7, you would pay about 20-30Rs in your electricity bill per month. (depends on the load and your place of stay as well) While there are a lot of things that can be done, below are a few to help you understand the use cases better

Say Hi to my Raspberry Pi

So that was my new Raspberry Pi 4 that I bought in December last year. While I’ve been spending considerable time with it already, how could I not write about it! I’m currently exploring social media automation bots that I’m developing to take care of my social media. Also, I’m working on auto back up of my blog along with NAS and media servers. So there are a lot of things in the pipeline! Did you like my Raspberry Pi? Say Hi by commenting down below. You can also tweet to me at @Atulmaharaj, DM on Instagram, or Get in touch.

A seasoned blogger and a content marketer for close to a decade now. I write about Food, Technology, Lifestyle, Travel, and Finance related posts. Blogging brings me joy and the best part is I get to read and e-meet so many amazing bloggers! PS: I'm also the founder for Socialmaharaj.com :) Favorite Quote: "Traveling is like reading a book, one who hasn't traveled, hasn't turned a page.
@atulmaharaj
Previous Divine Eggless Desserts at House of Desserts Hyderabad – Review
Next Latest PiBox Raspberry Pi Combo Kit – Review In case you missed reading my earlier blog posts, let me tell you that I’ve …